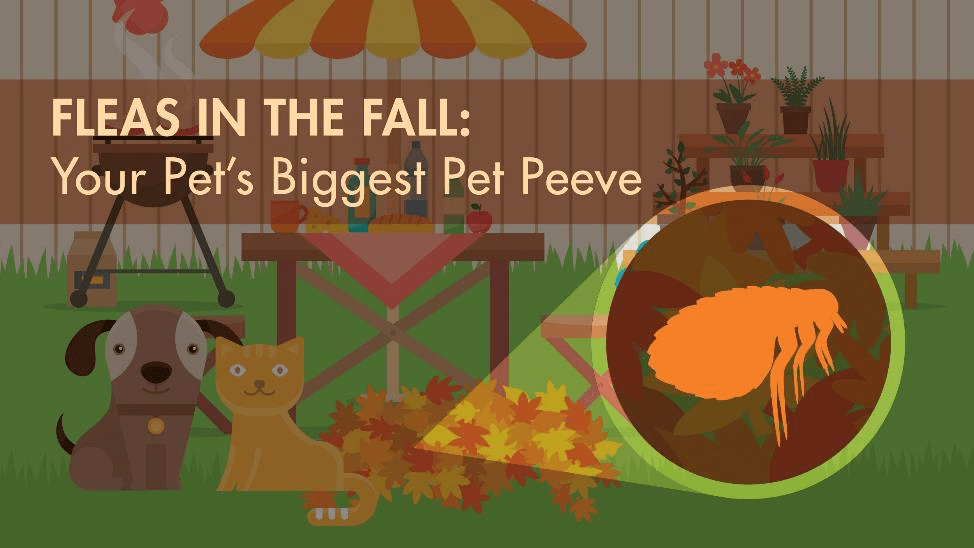 Fleas are no fun for your pets. This bloodsucking pest is known to give cats and dogs a hard time, and the end of the summer doesn’t bring any relief. During the fall in Southern California, they remain a threat, hanging out in yards and finding ways indoors by latching onto pets. To avoid flea problems as temperatures drop and pumpkin-flavored foods become the norm, equip yourself with knowledge of this pest’s autumn whereabouts.

A parasitic insect, the flea is the sole member of the insect order Siphonaptera. The order’s name derives from the Greek words “siphon,” meaning tube, and “aptera,” meaning wingless. Together, they aptly describe the flea – a non-flying pest that, using its cylindrical mouth, sucks blood from hosts. They most often feed on pets like cats and dogs, and occasionally people as well.

Fleas are hard to control, and biology has a lot to do with it. They’re practically invisible to the eye, measuring at a length of around 1/10 of an inch. While they don’t fly, they have impressive jumping power, as their strong hind legs allow them to leap over 50 times their body length. This is a big help when seeking hosts that are high off the ground; your golden retriever or German shepherd is no match for the mobility of the flea. 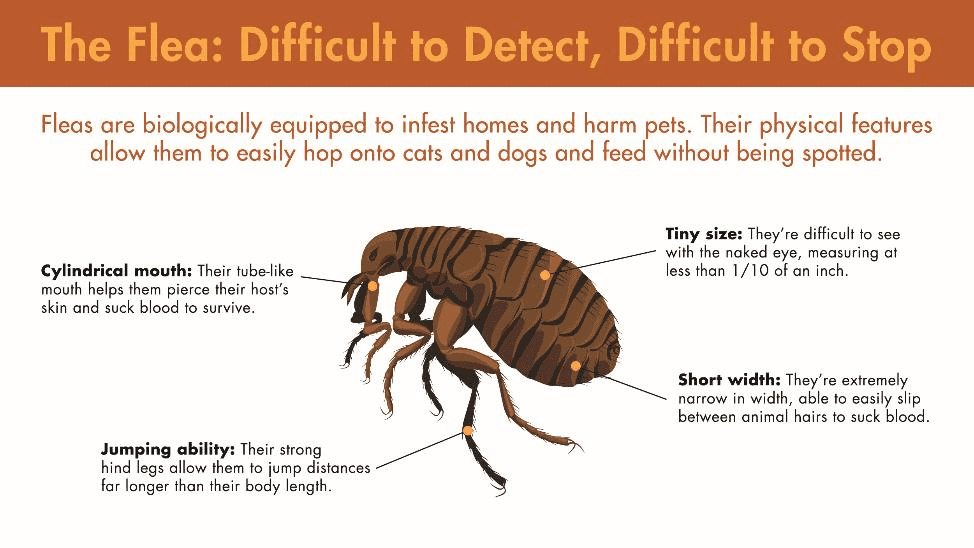 A Walking (and Hopping) Health Hazard

It makes sense, then, that fleas should be of grave concern for your pets. You might have already dealt with them in the past. The symptom that tips most people off to a flea infestation is their pet’s constant scratching. This is a result of flea allergy dermatitis, as flea bites make your pet’s skin quite itchy.

That’s not the worst of it, though. Fleas may also cause the following health complications:

Why Do Fleas Love the Fall?

It’s easy to think that fleas are solely a summer issue like most pests. But this bothersome bloodsucker is different than most. Because a variety of conditions make it easy for them to sustain colonies, one could argue that the risk of a flea infestation is actually heightened in the fall.

Here are a few reasons why fleas thrive this time of year:

More than anything, a huge reason for fleas’ fall frenzy is because they’re underestimated. Most pet owners tend to give their pets preventative treatments solely in the spring and summer, leaving them vulnerable when October hits. A firm understanding of fleas’ potential for harm is a good starting point, and it may prevent them from getting the upper hand. 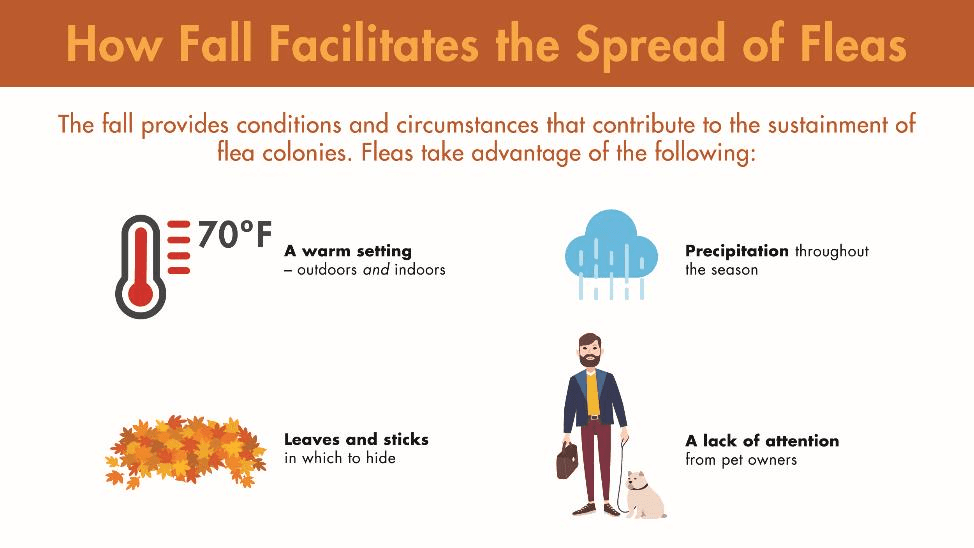 If you spot fleas on your pet, know that you’re only seeing the tip of the iceberg. Take a look around, and you may find that the rest of the population is scattered in places throughout the house and outside. With a bit of help from the fall conditions, flea infestations can spread fast. Here’s how:

With the fast spread of fleas, it’s important to take care of them before things get out of hand. Eliminate the root of the problem – bag leaves and sticks that may bring them to your yard in the first place. If they’ve already made it indoors, get rid of fleas by washing your pet’s bedding thoroughly and vacuuming carpet and furniture. Treat your cat or dog with flea medicine, and get them a preventative for future protection.

If fleas still don’t seem to go away, don’t fret. Many chemical pest control methods are proven to work, including residual pesticides. This won’t be enough against hardy cocoons, but another solution exists just for that. Chemical growth regulators prevent larvae from turning into cocoons – a surefire way of eliminating any fleas remaining in your home. 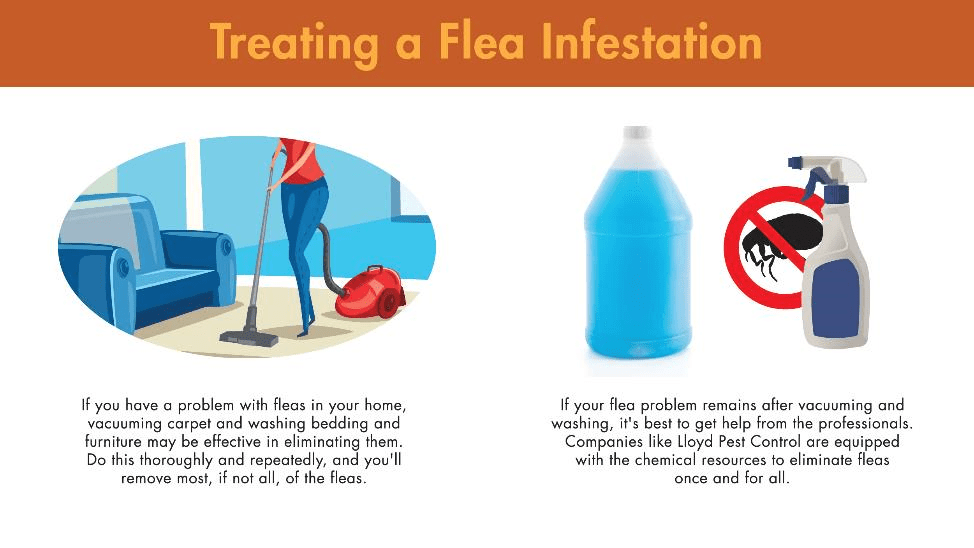 Fleas can survive year-round in Southern California, and the fall is an ideal time for them. That’s because falling leaves, wet weather, cozy homes, and – most importantly – active pets contribute to their colonies’ growth. The conditions here are perfect for this so-called “fall flea surge.” If your infestation has grown out of control, Lloyd Pest Control is capable of combating this bloodsucking parasite. We offer flea control in Southern California proven to reduce their numbers – and their risk to your pets.

For defense against fleas and other fall pests, contact us.