How to Prevent Wasps from Moving In This Summer

From backyard barbecues to patio parties, the beginning of summer marks a season full of outdoor celebrations with your friends and family. Whether you’re cooking up something delicious on the grill or sipping on an ice-cold drink, enjoying your time in the summer sun is no fun when wicked wasps try to crash your party!

In Southern California, wasps begin to build their numbers at the first sign of spring, creating their nests in tucked-away places to keep them protected from predators. If these sly stingers build their hives on or near your home – such as in your garden, underneath eaves, or on your deck – they can wreak havoc on you and your guests, especially if food, trash, or an abundance of other insects are nearby.

Although getting rid of wasps near your home may seem daunting at first, Lloyd Pest Control can help you humanely combat these territorial insects while avoiding painful stings, allowing you to enjoy your yard or patio this summer without the fear of wasp attacks! 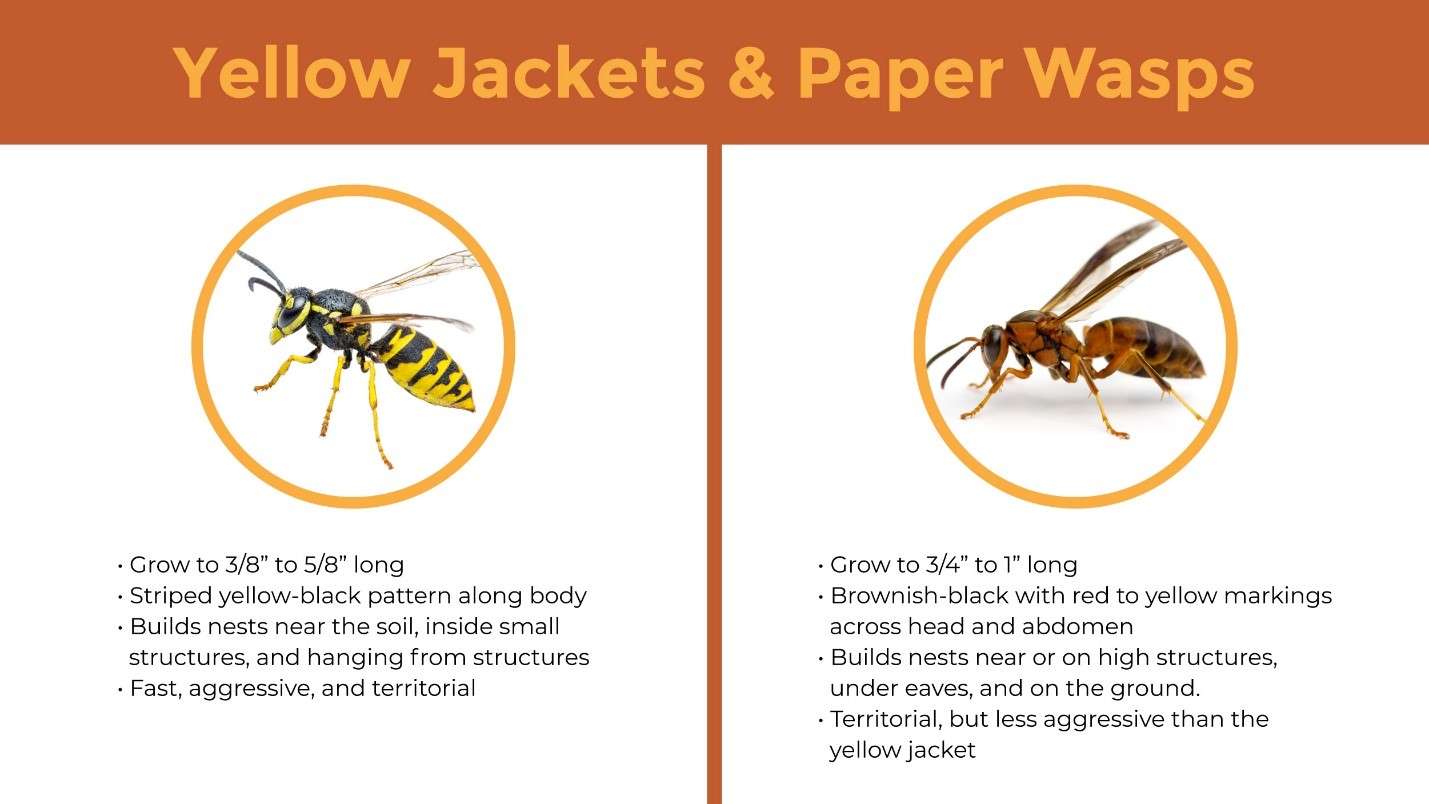 There are thousands of wasp species across the United States, but the two most common types in southern California are yellow jackets and paper wasps.

Although these wasps can be a nuisance to humans, they are an important part of the ecological food chain, as they kill off agricultural and horticultural insects – such as spiders, caterpillars, ants, and flies.

With thin waists and a yellow-black pattern that appears striped across their bodies, yellow jackets create nests that are constructed from chewed wood fibers and plant materials mixed with saliva. Their hives contain multiple layers of paper-like cells that can resemble the honeybee’s comb. Yellow jackets commonly build their nests near the soil or underground, but they can also create hives in hard-to-reach places like eaves, soffits, and inside window frames.

Larger than the European honeybee, yellow jackets are fast, aggressive, territorial, and food-motivated. Normally living near humans, these wasps are scavengers that love to munch on proteins and sweets; they will even go after foods or drinks that are in your hands!

Paper wasps are predominantly brownish-black with yellow to red markings along their head and abdomen. Sometimes known as “umbrella wasps,” paper wasps are slightly bigger than yellow jackets and create nests made from wood or bark that look like upside-down umbrellas.

Although paper wasps build their nests in similar areas to yellow jackets, they are much less aggressive and only defend their colony if they feel threatened.

Why Wasps Are Flocking to Your Fortress

Out in the wild, yellow jackets and paper wasps would normally make their nests in protected areas high up in trees or underneath shrubbery on the forest floor. With human homes in the mix, these wasps have a wide variety of sturdy places to choose from that satisfy their most basic hive requirements:

• Safety from Predators – From the top of a chimney to the underside of a bush, wasps can build their nests away from predators from just about any place around your home.
• Food Supplies – With things like unkempt trash cans, exposed sugary drinks, and protein-rich foods on your patio table, wasps can feast on human food without having to work too hard to find it. Even hummingbird feeders, nectar-rich flowers, and other insect hotspots – such as ant hills – can draw in wasps.
• Building Materials – Wasps can utilize rotting tree bark, old wooden fences, damaged siding, and common landscaping plants as materials to build their nests around your home.

Warding Off Wasps from Setting Up Camp

Properly keeping wasps from setting up camp around your home starts with establishing a wasp control prevention plan early in the year. Before spring hits, make sure to check your house, yard, and any surrounding structures for places that wasps could build nests. 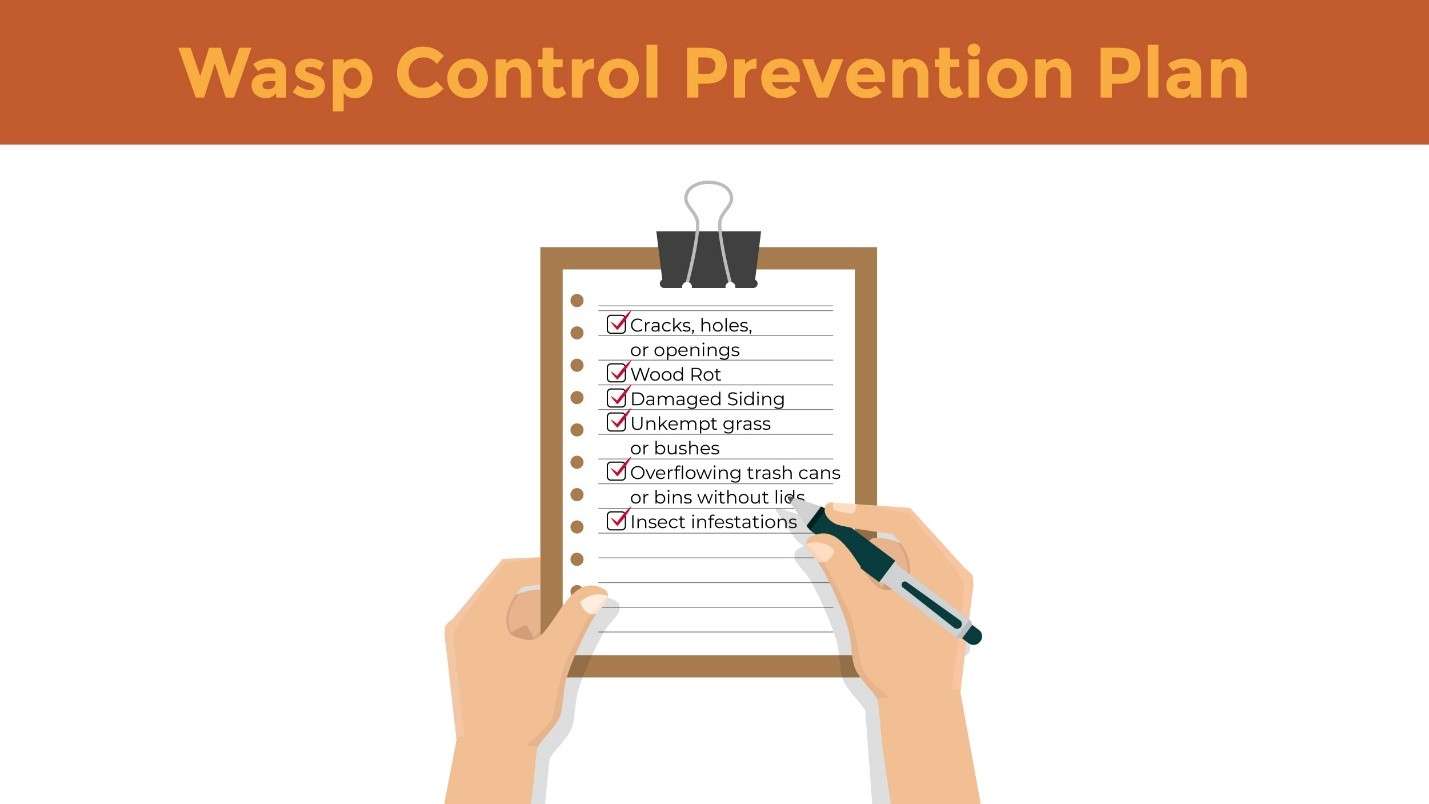 After you give your home a once-over, it’s important to carry out routine wasp control maintenance on any nook or cranny that seems hive-worthy. Do your best to close off or block any areas that wasps could get into, fix and seal old fences or decks, replace damaged siding, and keep your grass and bushes trimmed neatly on a regular basis.

Landscaping Away from Common Areas

If you plan to landscape in the spring, make sure to keep hummingbird feeders and nectar-rich flowers to a minimum or place them away from common areas like your patio or deck.

Opt for trash cans with tight-fitting lids and always keep your trash bags tied securely when placing them inside the bin. When you host outdoor get-togethers that involve food and drink, make sure that any spills are cleaned up promptly and that all trash makes it into the proper receptacle. Any soda or bits of food left behind could attract wasps as they hunt for full bellies.

Ridding Your Yard from Other Insect Infestations

With insect infestations – such as houseflies, spiders, ants, or caterpillars – it’s critical to call your pest professionals as early as possible. An overabundance of any of these insects can draw the attention of wasps while they’re out foraging for food, making your yard primary nesting grounds for large wasp colonies.

When it comes to DIY wasp control, there isn’t a foolproof solution to ensure that the colony will completely pack up and leave your area. While you may find many DIY wasp remedies floating across the internet, most of them will do little more than put you, your family, or your pets in harm’s way.

If you have a wasp nest nearby your home, it’s best to understand what hive removal methods you should avoid to prevent painful stings, damage to your property, and wasps from coming back. 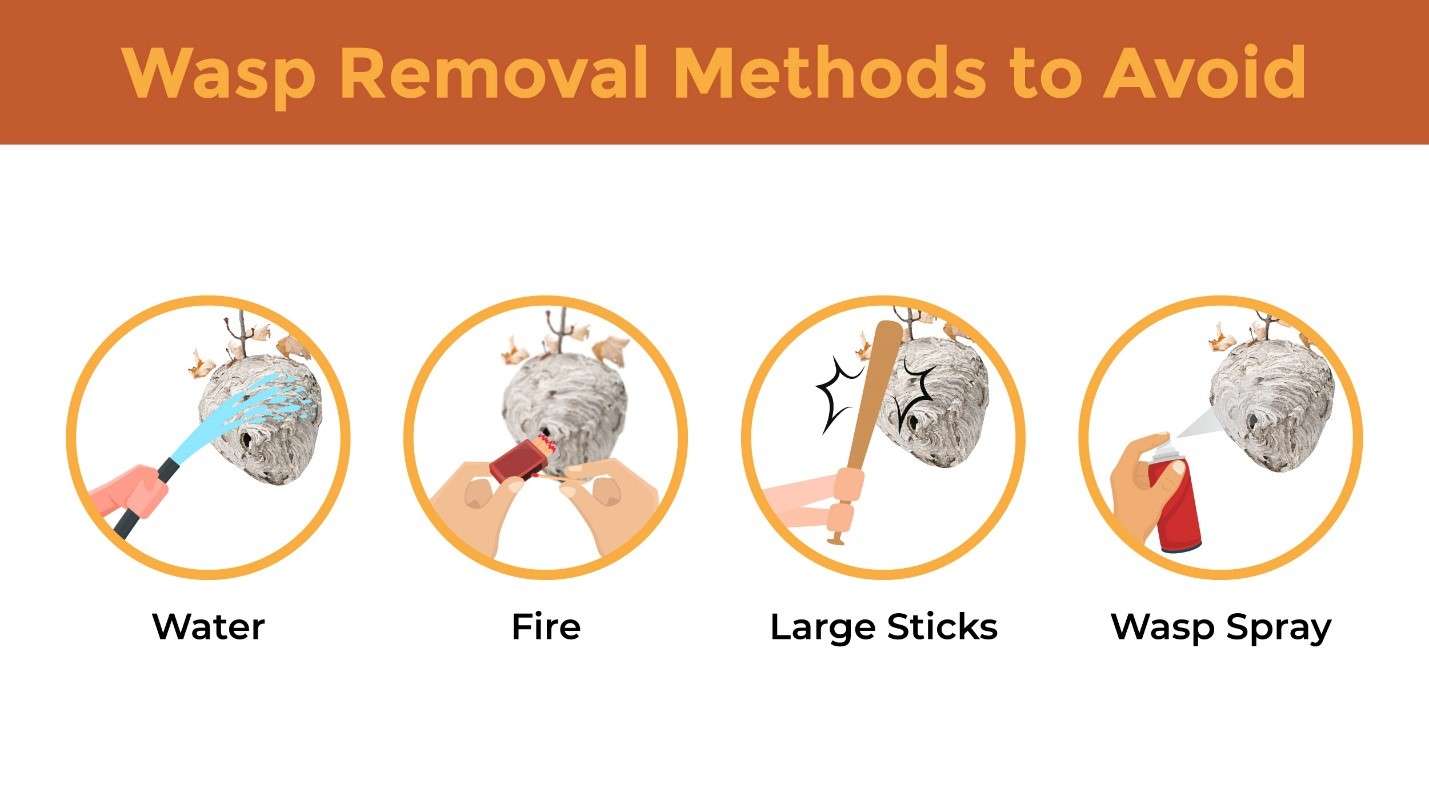 Your first instinct may be to grab a nearby hose and start spraying, but flooding a hive is not a foolproof solution. When wasps are sprayed with water, they become agitated and can start attacking. Once an aggravated wasp homes in on a target – aka you – it releases chemical pheromones that call in the colony cavalry.

Unlike bees, wasps can sting multiple times, so making them angry by soaking them is not a good idea. Additionally, spraying a wasp hive doesn’t properly dismantle the structure, and the wasps will likely come back when it dries out.

Similar to water, using fire to eliminate a wasp nest is ineffective – not to mention it’s highly dangerous. Because most wasps’ nests are made from chewed-up wood pulp, they are extremely flammable. If you manage to get close enough to set fire to a hive, you could run the risk of the flames spreading, which could cause irreversible damage to both you and your property.

Additionally, hive fires don’t adequately stave off the entire colony, as many wasps will fly away unharmed once a flame starts to burn the thin, papery outer layer of the nest, emitting their pheromones while doing so.

Attempting to destroy a wasp nest with a large stick, baseball bat, or any other pole-like object will likely put you right behind enemy lines. Being in such proximity to the colony, the likelihood of you being stung multiple times skyrockets. This DIY method of wasp nest removal is especially dangerous for those who are allergic to wasp stings, as anaphylactic shock could occur within minutes.

Hitting a wasp nest with any item will likely result in you being stung before any progress is made, so it’s best to avoid this method altogether.

While wasp sprays may seem like a simple and effective way to get rid of a hive, they aren’t a complete, spray-away solution. Even if you manage to spray the nest and eliminate a portion of the colony, each worker wasp – regardless if they are dead or alive – will release pheromones that could linger in the area for weeks. These chemical scents could draw in more wasps or other insects to the empty hive, putting you right back at square one.

Much like bees, wasps play a vital role in our ecosystem, so killing them rather than doing your best to prevent them is counterintuitive to a thriving ecological community.

Here at Lloyd Pest Control, our well-seasoned technicians are trained to handle wasp nest removal right at the source. While wearing a professional beekeeping suit, one of our team members will assess the hive and apply comprehensive treatments that will not only rid your home from these pests but will do so in the most humane way possible.

Afterward, we will thoroughly survey your land for potential areas that might be attracting wasps, providing you with effective wasp control treatment plans to ensure that other colonies won’t move in later down the road.