The Frustrating Factors That Have Helped Bed Bugs Flourish

Despite bed bugs living among humans for eons, there was a point in time when these blood-sucking bugs were so rare in the United States that some Americans didn’t even know they existed. If you were one of these people, you may have once believed they were simply a fictional, nursery rhyme creature.

But, due to a combination of factors including increased travel, regulations on powerful pesticides, and genetic resistance, bed bugs have come back with a vengeance.

In Southern California especially, they’re proving to be very real by causing quite the panic-ridden ordeal.

Bed bug problems go as far back as 3,500 years ago when humans were living in caves. For the U.S., bed bugs sailed on the same ship that brought the first colonists. From the time the Mayflower hit land to the late 1930s, they were a staple in American life. Infestations were common, and the pesky bugs appeared impossible to wipe out.

It wasn’t until 1939, when the Swiss chemist Paul Hermann Muller created the pesticide DDT, that weary homeowners were finally able to fight back.

For decades, Americans sprayed DDT all over their homes and hotels, effectively keeping their space bed bug-free. Since insects had never experienced a synthetic poison before, both bed bugs and many other pests were vulnerable.

But, in the 1970s, the U.S. ultimately banned DDT, as it was proven to be highly toxic to humans and other wildlife, too.

How Bed Bugs Made a Comeback 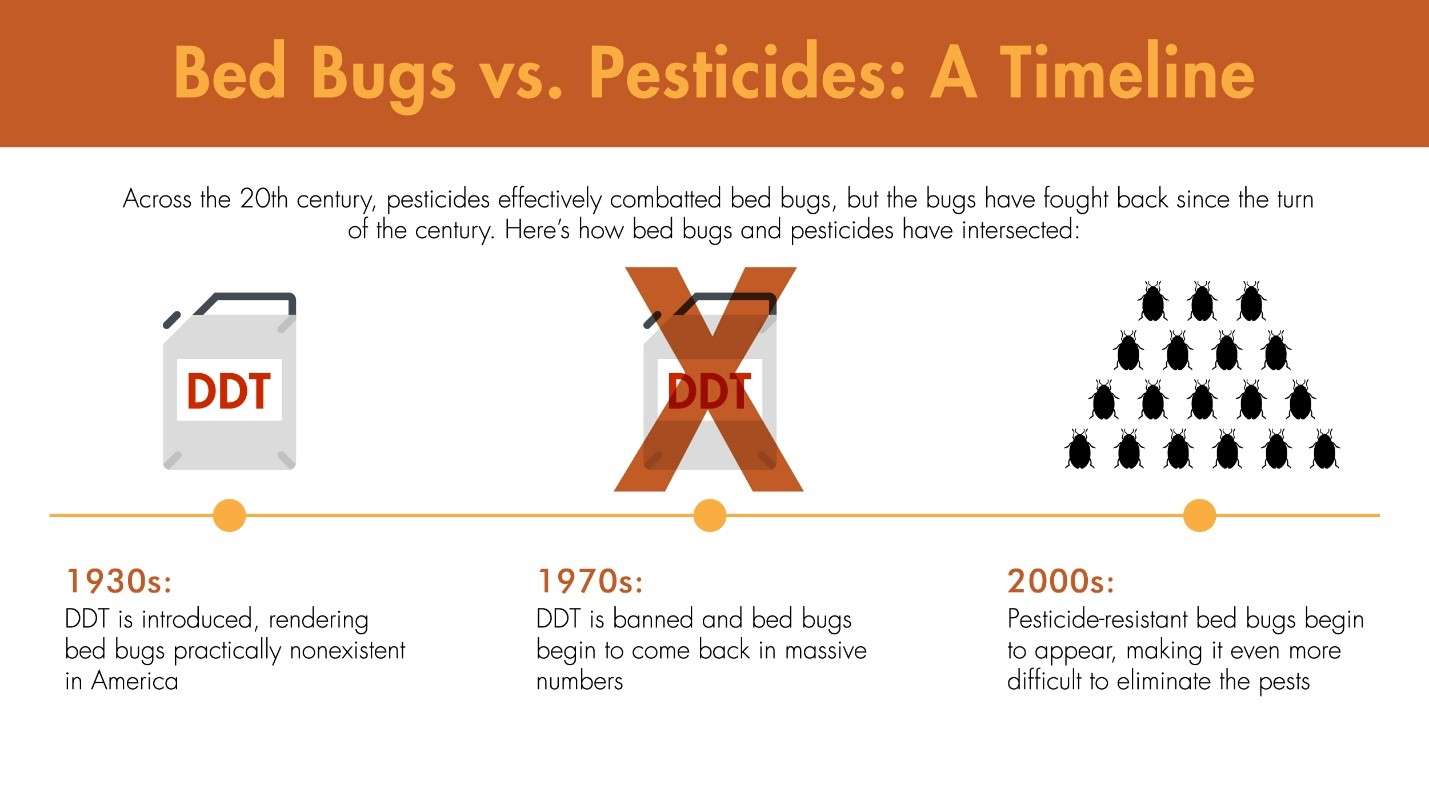 After 60 years of near eradication in the U.S., bed bugs bounced back. Many insects have the keen ability to adapt to their environment, and in the early 2000s, pockets of pesticide-resistant bed bugs popped up throughout the world.

Three ways bed bugs have become resistant to pesticides like DDT include:

• They developed a genetic mutation that allowed them to close their ion channels, which DDT worked to open and harm their nervous systems.
• They acquired enzymes that help them break down the toxicity of pesticides quicker, making them less effective.
• They have started to grow thicker exoskeletons, which make it tougher for pesticides to penetrate.

Bed bugs’ resistance to pesticides has allowed them to come back in large numbers, but how exactly did these durable bugs make it all over the world? Well, they’re remarkably good hitchhikers.

They’re attracted to body heat, pheromones, and carbon dioxide, and they’re known to catch a ride on traveling tourists and their luggage while staying in a hotel. Pair this with the continued increase in air travel – domestically and internationally – that helps bed bugs spread, and it’s no wonder these bugs have been able to come back so rapidly.

Because our Southern California home is a hotspot for vacationers, we typically have bigger bed bug issues, too. Tourists from across the world are constantly arriving in airports and bringing bed bugs in. Infestations in San Diego, Palm Springs, and Orange County have proven our region is no exception. With long commutes and a constantly mobile population, bed bugs have effectively gotten everywhere.

You may not realize you have unwanted houseguests until you wake up with mysterious bites and rashes, or – if you’re allergic – you may not even notice an infestation until it gets bad. People’s inability to identify bed bugs is another factor that has led to their resurgence in the U.S.

By nature, bed bugs are cryptic insects, hiding in cracks and crevices during the day, only coming out under the cover of darkness. To help you spot them, look for reddish-brown colored insects with flat, oval-shaped bodies. 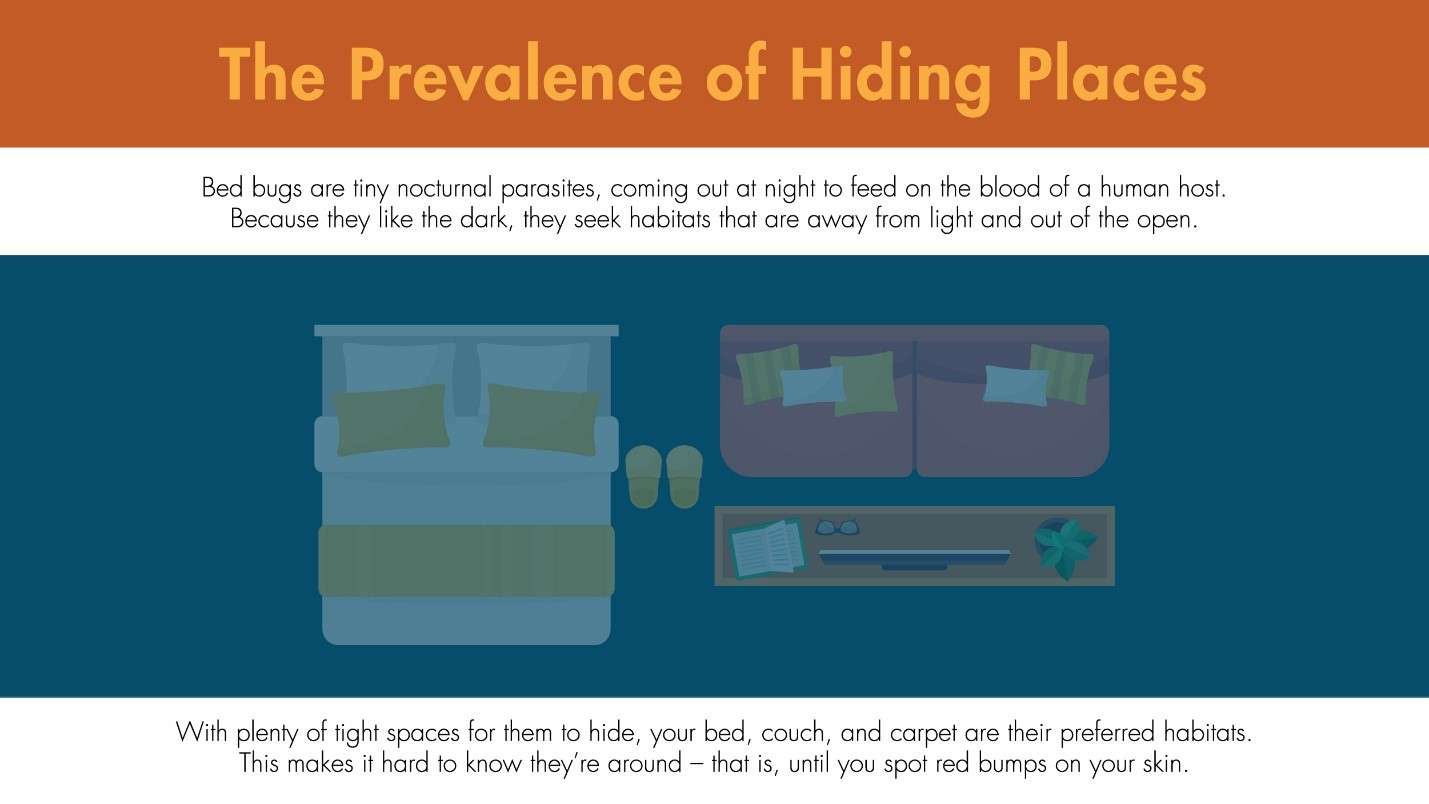 They’re named after their preference for the sanctuary of your bedroom, but other hotspots include sofas and any place you spend an extended amount of time not moving very much.

Since bed bugs are typically nocturnal, they despise being out in the open or a lot of sunlight, so they hide in openings in furniture, floors, and walls during the day or whenever you’re not home.

For bedrooms, you may think mattresses alone are bed bug hubs. But, as a soft surface without many crevices to take shelter in, the bug prefers to hide in the box spring, headboard, and nightstand before flocking to the host at night. Don’t be fooled by believing any crack is too small, either. A hatchling is the mere size of the head of a nail.

For frequent travelers, a quick bed bug check should be the first thing you do upon arriving at a hotel. Before bringing your luggage through the door, take a flashlight and perform a precursory inspection of the mattress, box spring, and headboard. This is one of the best ways to ensure you don’t take any hitchhikers back to your home and set up a whole new infestation. 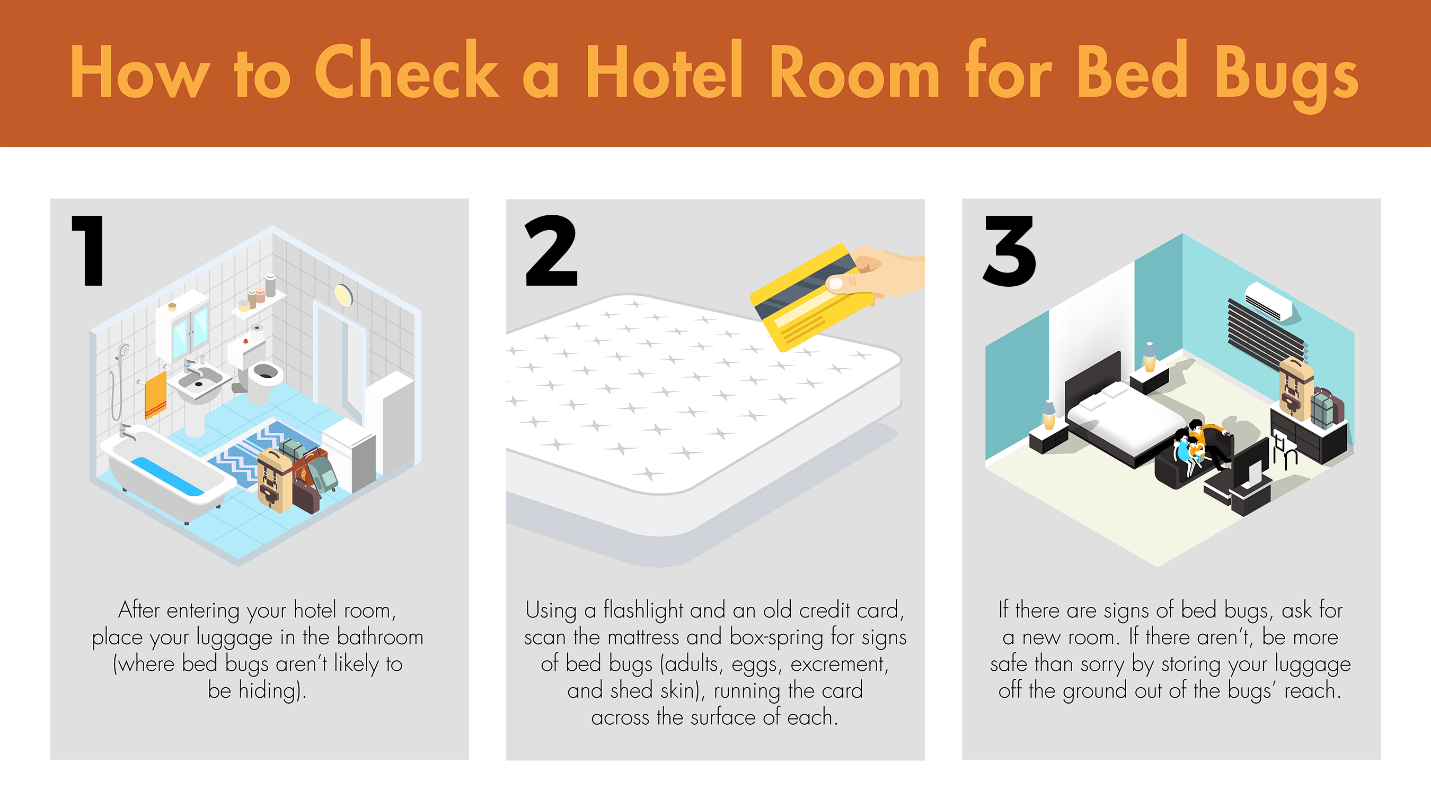 Bringing second-hand furniture into your home is another thing you should be cautious about when it comes to preventing bed bugs. It’s common for people to purchase used furniture for an unbeatable deal or pick a piece up off the curb, only to realize later that it’s infested with bed bugs. So, the next time you’re tempted to give discarded furniture a new home, it may be wise to think twice about the price.

One of the most important things to keep in mind when it comes to bed bugs is that it’s easier and cheaper to treat an infestation early. Simply throwing out the mattress isn’t a solution, as bed bugs can hide in a variety of cracks throughout your home. It’s best to call in the professionals as soon as you have a suspicion that these bothersome bugs are harboring in your home.

Fight Back Against Bed Bugs with Professional Help

Bed bugs are currently one of the greatest challenges facing the pest control industry. But at Lloyd Pest Control, we have the expert bed bug treatments you need to carefully and effectively banish existing bugs from your bedroom. While bed bugs can always come back due to their traveling nature, we approach them with a variety of treatments, including:

We also conduct follow-up treatments to ensure they are stopped at every life stage. By checking every possible hiding place, we want to ensure no bug gets left behind. If you need help combatting bed bugs in Southern California, contact Lloyd Pest Control for the most thorough solution.