Why Do I Have Ants in My Home? How Do I Get Rid of Ants?

If you happen to spot a trail of ants in your home or business, the Argentine ant is likely the culprit. But what has made these insects such a widespread concern in our region? And why do you have these ants in your area?

As one of the most pervasive creatures around the globe, Argentine ants’ path to world domination hasn’t gone unnoticed—especially in San Diego, Orange, Los Angeles, and Riverside Counties. Masters of propagating their kind, Argentine ants (Linepithema humile) build massive colonies, disrupt the natural order of other species, and intervene in our daily lives with their sheer numbers.

A Long Journey to North America

Nearly two centuries ago, Argentine ants made their way to North America via long-distance jump dispersion due to increased trade and globalization. Native to South American countries like Argentina (hence their name), they accidentally made their way to the United States by boarding cargo ships in Brazil—containing shipments of coffee beans—and traveling to New Orleans in the late 1800s, allowing them to inhabit six of the seven continents around the world. 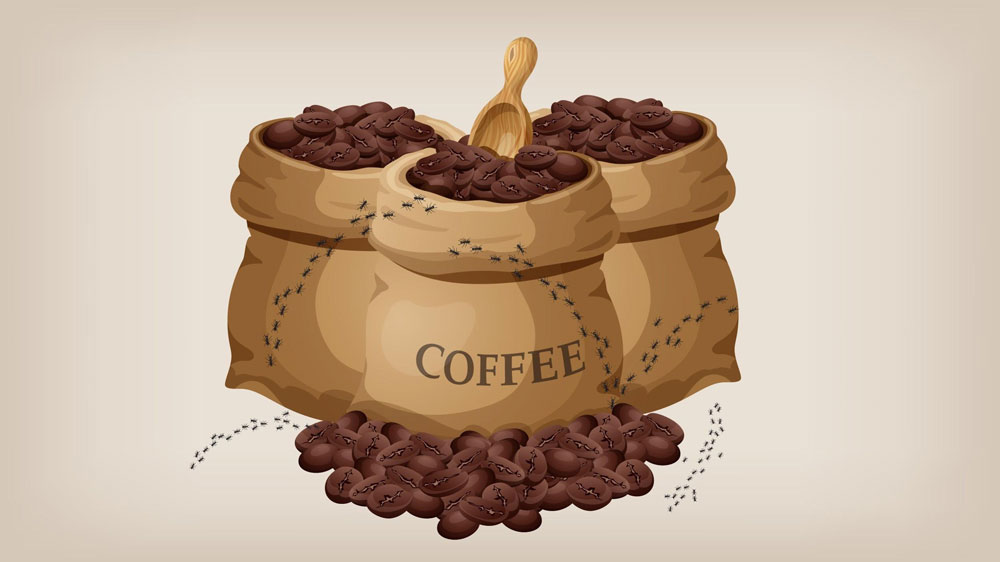 The key to Argentine ants’ success lies with their superior ability to reproduce and coexist with members of their own kind from different colonies. Featuring more queens per colony than any other species of ants, Argentine ants can have nearly 15 queens for every 1,000 workers and can produce eggs for up to 10 years after mating—allowing the colony to flourish rapidly and consistently. As colonies can grow to numbers in the tens of thousands, hundreds of queens could exist across large areas of land, sometimes hundreds of miles long.

During the reproduction cycle, Argentine ants don’t swarm as other ant species do. Instead, they stick with the colony in their respective nests to mate. However, queens can leave their nests with a group of workers—a natural dispersal technique called budding—to start a new colony if they deem it too crowded. Even then, colonies often stay physically in touch with each other.

Unique to the Argentine ant, these insects lack hostile response mechanisms to members of the same species, which allows workers from different nests to be cooperative with one another and form supercolonies.

Argentine ants feature three different types of progeny: workers, males, and queens. Workers are 2 to 3 millimeters long with a brown complexion. Males are also extremely small—ranging from 2.8 to 3 millimeters in length—but are winged, dark brown, and have a broader thorax (the section between the head and the abdomen) than their heads.

Queens are larger than workers and males, featuring a body length between 4.5 to 5 millimeters, a dark brown complexion, and a large thorax as broad as their head. Virgin queens also feature long, narrow wings. 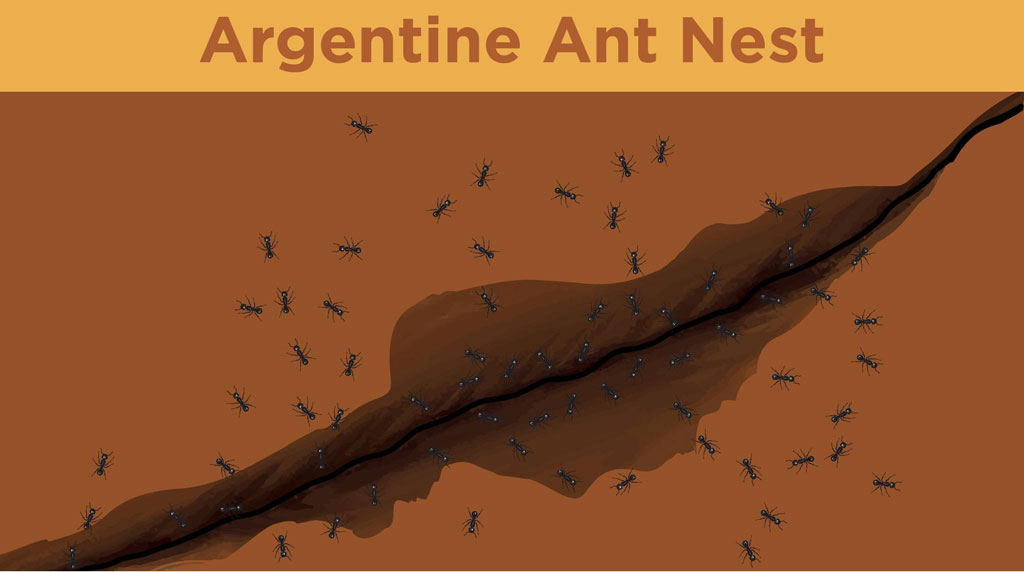 Argentine ants thrive in Southern California due to our temperate climate, creating outdoor nests in the soil underneath wood slabs and yard debris as well as within the branches or cavities of trees and shrubs. These ants create 1- to 2-inch deep mounds in either moist or semi-dry soil, allowing them to thrive in many different areas around your home or business.

Why You Have Argentine Ants in Your Home

To make matters worse, our homes and businesses in Southern California give Argentine ants moisture-rich shelter when inclement weather hits. Because it’s so dry here, Argentine ants will seek out shelter indoors to forage for water sources and food. Unfortunately, their survival is in part due to the sustenance our modern buildings provide.

Whether Argentine ants are indoors or outdoors, they’re constantly on the hunt for food sources to feed their ravenous colonies. Argentine ants like to eat different foods depending on their type:

Argentine ants specifically seek out a sweet substance called honeydew, secreted by tiny plant-destroying insects called aphids. To prevent Argentine ant issues, control your aphid population by reducing the number of plants in your garden and spraying existing plants with cold water, which is a known aphid deterrent. 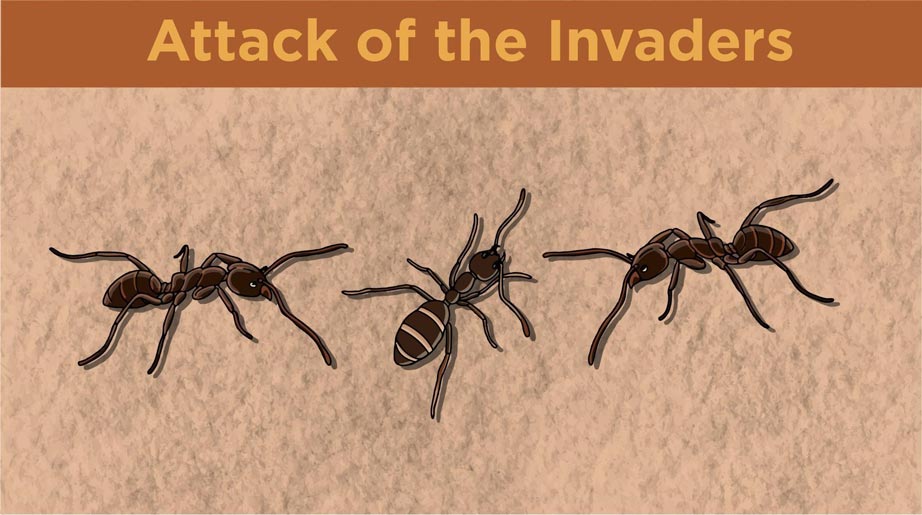 For hundreds of years, odorous house ants were the species that reigned supreme in California. But since the Argentine ant has made it to Southern California, native ants haven’t stood a chance. Argentine ants are an invasive species that can take on opponents up to 10 times their size—especially as an army of thousands come together as one.

Unfortunately, the results have been bad for our natural ecosystem. Without native ants to feed on, many animals—like the horned lizard—have lost some of their primary food sources. Local plants have lost many of their pollinators, as well.

How to Get Rid of Argentine Ants in Southern California

While Argentine ants may dominate native insect species in Southern California, you can combat these ants by preventing them from nesting or entering your home. Some prevention tactics include:

As Argentine ants come indoors to source food and water, professionally implemented baits are an effective strategy to take out both queens and workers. With yearly ant control applications to your foundation from Lloyd Pest Control, you can keep these aggressive ants away from your home or business.

As one of the most detested insects in Southern California, both by property owners and other insects, Argentine ants have a negative impact on our surrounding ecosystem. Although these ants don’t pose a physical threat to humans, their massive colonies can be attributed to the demise of species in our area—meaning controlling their numbers is more important than ever.

Here at Lloyd, we provide innovative, eco-friendly solutions to eradicate ants in your home, going above and beyond simple, self-applied bait treatments. We’ll also keep Argentine ants from getting indoors by strategically applying ant-repelling products, creating a natural barrier around the foundation of your home that keeps these invading insects far away all year long.

Send this invasive species running for its homeland. Call Lloyd today to get rid of ants in Southern California!